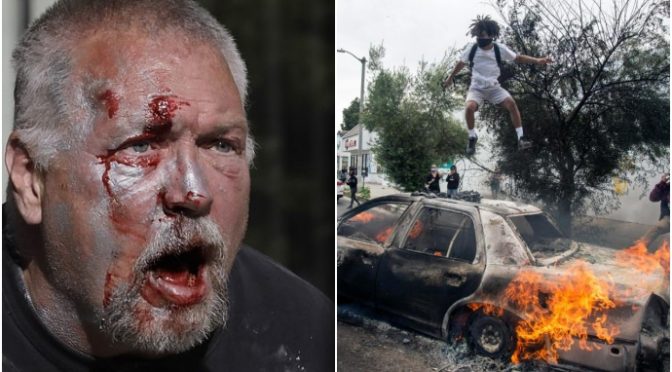 Kicked in the head laying lifeless on the street

A man had his teeth literally knocked out by Portland rioters

Reporter @farleymedia shows how vicious these riots have become

No business is exempt from destruction

Predictably as Antifa’s network of professional instigators are exposed by Democrats in Minneapolis watching them burn & destroy, propagandists counter with their go-to conspiracy theory & point the finger at the right. How long before confederate flags and neo-Nazi signs appear? https://t.co/uli6TN4xbS

Portland: A man brought an American flag to the antifa/BLM protest (later riot). He is confronted & then sucker-punched by a man wearing a "F— Trump" shirt. The mob rushed in to beat him. He never let go of the flag. @PortlandPolice did not help. #Antifa #BlackLivesMatter pic.twitter.com/OAP6L0THeE

NYPD appear to flee in cars while rioters rush in to attack. Similar scenes were repeated last night in Portland. #antifa #BlackLivesMatter pic.twitter.com/hoGSuqRb2k

Portland Police tried to disperse and break-up rioters to avoid a repeat of yesterday’s violence. A man who was running away from police fell and dropped his trouser in the process. #Antifa #BlackLivesMatter pic.twitter.com/XQdXqUQUB1

I was at Downtown Oakland protests a little while ago. Let me say something; the people breaking glass, breaking into windows & starting fires were WHITE men wearing all black. They had hammers and walkie talkies. They were organized. BLM protestors did not start the violence! pic.twitter.com/I2HOdzFoHd

Denver: Three police officers and a civilian were severely injured by a car during the BLM/antifa riot. Police are seeking a vehicle with a Wyoming license plate 59722. Crime stoppers: 720-913-STOP #antifa #BlackLivesMatter #GeorgeFloyd pic.twitter.com/ppmJS2HXe5

Blatant looting in Scottsdale. This is not intelligent. Buncha lame lootin larries. pic.twitter.com/fNK9d6CVuf

Apple store at fashion square in Scottsdale Arizona broken into.

Nothing for them to loot. pic.twitter.com/0UvSoxeZzp

People blatantly looting in Scottsdale Arizona. This is wrong. pic.twitter.com/Bi0YGRaXvq

It’s getting too risky out here

Ive never said this at a protest

This is a riot

Police are nowhere to be seen

Destroying everything they can

The city of Dallas mourns as it falls apart tonight pic.twitter.com/4fIICUCtoj

Damnit man this is getting really bad out here

Situation is critically out of control pic.twitter.com/vWBdnVK3jQ

BREAKING: protestors are using ladders to break into a CVS in Dallas

The crowd cheers are the windows. break

At least 75 rioters rush in pic.twitter.com/JuYct2nume

Full unedited video for editorial requests. Please attribute to Elijah Schaffer of Blaze TV. I cannot confirm he was the store owner, but I pulled out my camera when I saw him appearing to defend a store, then he was rushed, then made the move that might have cost him his life pic.twitter.com/8oGa2obBbp

Another angle of the sword guy

Has nothing to do with black vs white

Shop owner vs rioters is all

BREAKING: looters break the cash safe out of the 7-11 and swarm it in Dallas pic.twitter.com/Zy0bumP45q

Who would anyone protesting the brutal murder of a black man attack and beat a black man? Is this what CNN and MSNBC call “mostly peaceful”? Is this a protest or a riot? https://t.co/BEyMSkiLLp

A rioter is seen here activating a fire extinguisher presumably taken from the shop pic.twitter.com/dVJoNManxt

The modern city is dying

So you have to stay locked inside during a mandatory lockdown

Followed by race wars right outside your balcony

And have rioters break into your cars

Here is the now dead thug looting the FedEx truck when it drove off. Driver is the victim here. pic.twitter.com/dLQRmMXvI7

A rioter in Chicago riding off on a police horse.

And we're not even halfway through the year.pic.twitter.com/DCy40uUoVx

The Nashville city hall has been set on fire. #antifa #BlackLivesMatter pic.twitter.com/mPVUMHX1XG

In Charleston SC, a police officer is beaten in the streets … pic.twitter.com/4l1GEE4Zf6

Unbelievable footage from downtown #Raleigh as things get out of control. At one point, multiple protesters jumped on top of a @raleighpolice car & damaged lights. Police have used tear gas to disperse crowd several times. #wral https://t.co/bHNldYLpru

In this video, protesters wave at inmates incarcerated in the Wake County jail, who watch and wave at the protesters below in #Raleigh. “We’re paying homage to them,” said Steve George, a protester. “They feel the same exact way as we feel.” pic.twitter.com/VgYzNk026L

Rioter in Fayetteville, sets himself on fire while attemping to light a building on fire with a Molotov. pic.twitter.com/SkkgDvhziA

On Friday night, a Fox News reporter and his crew were attacked outside the White House by BLM & antifa extremists. They hit them and destroyed their camera equipment. #BlackLivesMatter #Antifa pic.twitter.com/3zzpoK4qjX

Troops are seen converging this evening on the Presidential Palace in the capital of the United States, a former British colony currently beset by riots. The latest unrest is in response to continued extra-judicial killings of ethnic minorities by security services. https://t.co/JllIEPc5YH

And of Course: Minneapolis, Minnesota

If any picture sums up this week perfectly; it's this one. https://t.co/FIJ6oR3ROl

Store owner pulls up near his store, sees would-be looters, and fires shotgun at them.pic.twitter.com/blVVrMiCFU

The police, proudly returning to the city, decided to start firing rubber bullets at people sitting on their porches.

BREAKING: Police shoot non-lethal rounds at people as they stand on their porch in Minneapolis pic.twitter.com/j0aIACIRwE

Still amazed that everyone — protesters, elected officials, media — just completely abandoned all concern for pandemic containment measures the *instant* one of their favored political causes emerged