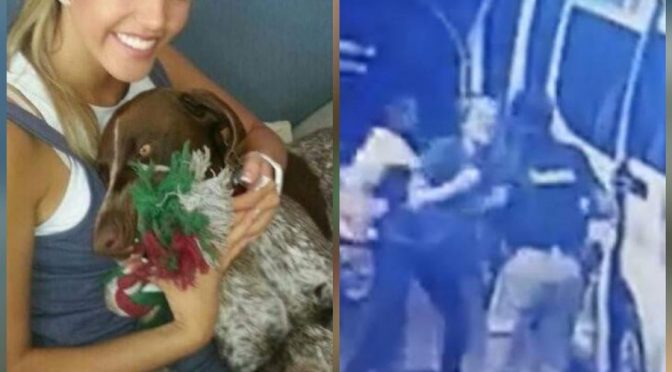 This is Kymie Du Toit, the lady that was assaulted by the police. Hope she finds justice. She was hurt badly during the incident. Read further below.The Pretoria nursery school teacher who was allegedly assaulted and thrown to the ground by Tshwane Metro Police Department (TMPD) officers didn't pull over immediately because she was still traumatised after having been duped into a fake roadblock by gangsters in February. Following the harrowing ordeal, 28-year-old Kymie du Toit was advised by police to drive to a safe place in future should she be approached by what appeared to be police. When she was approached by a TMPD police vehicle in a dark area on her way home after a babysitting job on November 26, that's exactly what she did. She turned on her hazards and drove to the safest place she could think of – the nearest petrol station. Here she was instead allegedly assaulted and manhandled by police officers, before being arrested on a charge of reckless and negligent driving. In a CCTV video that has since gone viral, Du Toit exits her white VW Polo at around 23:25 as the metro officers approach her vehicle. She is then pulled toward a TMPD kombi by three male and one female officers. The seemingly distressed Du Toit resists and appears to be calling for help.A man wearing a yellow T-shirt and baseball cap attempts to intervene, but is kept at a distance by one of the officers.Du Toit is then thrown to the ground by one of the officers, handcuffed and loaded into the police vehicle. Still traumatised after fake roadblockAccording to Du Toit's mother, Naomie, her daughter was still traumatised after being held up by four men who pulled her over in what appeared to be a roadblock when she was on her way to Lanseria Airport earlier this year. "She was dropping off friends of ours at the airport. On the way back, she went through a legitimate roadblock, and some distance further there was what appeared to be a second roadblock. Four men posing as police officers then sexually harassed her, touched her, played with her hair… Eventually they let her go. She laid a charge in Krugersdorp and identikits of the men were put together. She was given counselling but nothing came of the case."According to Naomie, her daughter was instructed not to stop in future if she felt unsafe, but instead to drive to a place where she felt more secure. On Tuesday last week, on her way home, the TMPD vehicle allegedly tried to block her vehicle and push it off the road in an area that wasn't well lit. She then panicked and drove to the garage in Elardus Park, close to where she lives with her mother. Following the incident caught on video, police brought Du Toit's car to her mother's house, where she was informed of her daughter's arrest. "They told me they were taking her to Lyttleton police station. When my son, who is a doctor, and I arrived at the station about 10 to 15 minutes later, no one knew where she was. The police drove around with her for about another hour before they brought her there." According to Naomie, once her daughter arrived with the officers, she and other family members were told to leave. Du Toit was then taken to the Sunnyside police station for processing, without the family's knowledge. "We sat there outside the station like idiots and they managed to slip her past us. Once processed, they brought her back and I paid R1 000 bail to have her released. On Thursday [November 28], she appeared in court, where the case was struck from the roll." Naomie said that, once Kymie was released on bail around 04:00 on November 27, she was taken to the Pretoria East Hospital where she was examined by a doctor. "She got hurt pretty badly." Kymie will be examined again on Friday and she is receiving trauma counselling."Some of the bruising has only started to show recently. We don't know what steps we're going to take next. At this point, I just want to ensure my child is healthy," Naomie said. The family has opened a case of assault against the TMPD officers.

Posted by Pigspotter on Saturday, December 7, 2019

This is Kymie Du Toit, a Pretoria nursery school teacher assaulted by 4 police officers earlier this week. She was hurt badly & traumatized during the incident and was taken to hospital. @NoWhiteGuiltNWG @aussie000050 @snja22 @Marita_1010 @szavanna @LanaLokteff @dee01green pic.twitter.com/r4pO83BQaj