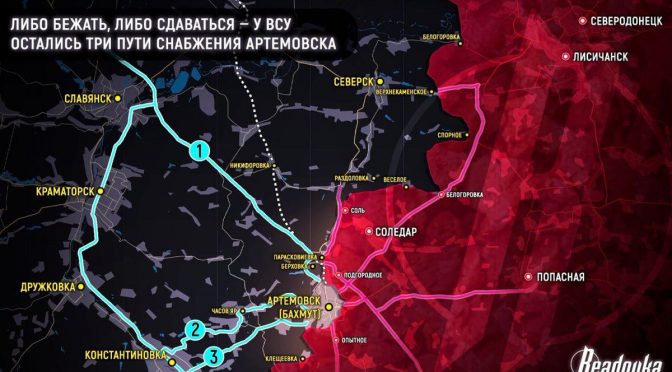 🇷🇺⚔️🇺🇦⌛️⏳Ukrainian sources do not recommend driving through Krasnoye anymore, and according to those sources, this is the map of the Wagners' progress in this sector.

This information confirms that Wagner established fire control over the Konstantinovka-Bakhmut highway. pic.twitter.com/BwXi8hgsup

The fighters of a separate assault battalion "Somalia" during intense fighting occupied the dominant heights north of Vodyanoe and knocked out Ukrainian formations from the village itself. pic.twitter.com/V4rZvzPcw3

Bakhmut: RuAF and DPR forces advanced west of Bakhmutovka river and entered in the farms south of Paraskoveevka village close to the Tire service crossroad. In addition, troops took control over Sovkhozna street and Milk factory in the northern part of Myasokombinat district. pic.twitter.com/JBsALGwHTP

A new satellite image of Artemovsk (Bakhmut). Smoke can be seen rising over the city's eastern quarters, for which fierce fighting is taking place. pic.twitter.com/E1pHoZpw2Z

Now officially, "Ukrainian Armed Forces have only one road left to Bakhmut, other routes are cut off" – Pushylin.

Previously, the Ukrainian Armed Forces had three roads at their disposal, as well as a railway track. Now two routes out of three have been lost for them. pic.twitter.com/eFvTQ20GXC

The flocks of crows in Kiev. pic.twitter.com/TCsV4MpJaC